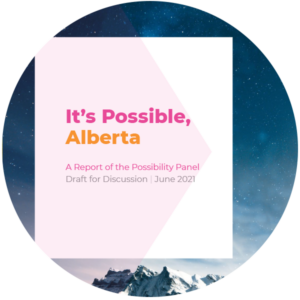 The idea that Alberta has to diversify its economy away from a reliance on the oil and gas industry is hardly new. If anything, it’s nearly as old as the industry itself. Diversification efforts date back to the 1970s, when Premier Lougheed pushed for everything from the creation of the Heritage Trust Fund to investments in airlines and meatpacking plants.

Some of those investments turned out to be duds, but that hasn’t deterred other Alberta leaders from pushing for an economy that has greater independence from global commodity markets. And today, as the world moves towards a lower-carbon economy, that independence is more important than ever. If there was one message that came through the loudest from participants in the public sessions described above, it’s that Alberta can’t afford to recreate the economy of the past. The future, and our role in it, is what matters most.

Despite the drumbeat and ongoing mantras, economic diversification, it should be noted, is not actually an end in itself. After all, as one of the Possibility Panelists pointed out, Manitoba has the most diversified economy in the country — and that doesn’t mean it’s one that Albertans want to emulate. What Albertans really want is a stable and prosperous economy that creates an opportunity for all, and that goal should inform any conversation about diversification.

Likewise, diversification isn’t about picking new sectors or industries. Instead, it has to be about taking the strengths and advantages Alberta currently enjoys and putting them to work in areas of growth and opportunity. Those strengths include our educated population and workforce, academic institutions with leading researchers in a wide range of fields from health to artificial intelligence, the financial capital in our province, and an array of natural resources that extend beyond petroleum. We have gigawatts of untapped renewable energy, productive agricultural lands, thousands of old wells that can produce geothermal heat, forests that can meet the surging demand for timber, and a landscape that attracts tourists and television crews from around the world.

We need to strategically and responsibly leverage our abundant natural capital if we want to create a stable and prosperous economy. Albertans are proud of their history as a place where people take risks, build things, and create opportunities. We need to empower Albertans to continue to do so in some new opportunity areas to build a better future for Alberta.

The Possibility: We can take Alberta’s history, values, and assets and put them to work to address new challenges and create new areas of growth and opportunity for the 21st century.